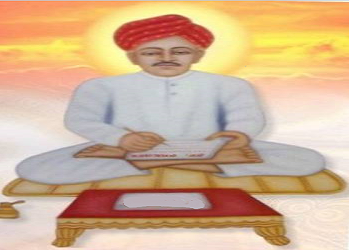 The great spiritualist genius poet Pt. Banarsi Das was born at Jaunpur (U.P.). His grand-father Shri Mool Das was a scholar of Hindi and Persian. Nawab of Narwar had appointed him his Modi. After his death the Nawab took away all his property and his wife settled at Jaunpur where her father Madan Singh Chinalia was a big jeweller. Later, his father Kharag Sain had settled at Agra doing jewellery business there. Pt. Banarsi Das did jewellery and other businesses but could not achieve success in any of them. Later he had settled at Agra, then the centre of Jain learning, and received intensive religious education from Jain scholars particularly Muni Bhanu Chand. Along with his companions Pt. Roop Chand Chatu- rbhuj, Bhagwati Das, Kanwar Pal and Dharam Das he was devoted to religious discourses and creation of spiritual literature and was a prominent member of the spiritual Saili.

Married thrice, the first being at the age of 11, he had lost his first two wives and all the 9 children during his life time. Navras Padyawali containing 1000 couplets and quadruplets on love was his first poetic work at the age of 15. He later felt sorry for making such compositions and threw the manuscript in river Gomti.

He was contemporary of saint poets Tulsi Das and Sunder Das who are believed to have met him. His fame had reached far and wide and even the distantly placed Jains of Multan had contacts with him. He taught ‘Shrutbodh’ to Chinkali Khan, governor of Jaunpur. Having heard of his great learning, Emperor Shahjahan had made him his courtier and had much regard for him.

Pt. Banarsi Das was very well versed with Hindi, Prakrit, Sanskrit and Persian and also knew other regional languages. His traceable works so far are Nam Mala, Banarsi Vilas, Ardha Kathanak, Moh Vivek Yudha, Manjha, Natak Samayasar and other misc. poems.In his historically important Ardha Kathanak, the first critical autobiography in Hindi, written by him in 1611, he has given both good and bad aspects of his 55 years of life (1586—1641) with a clear heart. It also gives information on his ancestors, rulers, administrative system and common man’s life then existing. It describes that Srimal, Oswal and Agarwal Jains had highly prosperous business in Northern India, from Punjab and Sindh to Bengal, and that they were well educated and had good contacts with the rulers and senior officers Balbodhini Tika of Samayasar Kalash (of Acharya Amrit Chandra) by Pandey Rajmall had attracted Pt. Banarsi Das to spiritualism. Natak Samayasar having 727 compositions was his last poetic translation, with tinge of originality, of Acharya Kund Kund’s Prakrit work Samayasarpahud. It was completed by him at Agra in 1636 and received wide popularity.